the thread is 1/2" BSCyc with 20 tpi definitely. I have just gone through the exercise having to properly cut the thread is a pattern part nut 24-7000 as it would not catch the thread on the camshaft.

I hope this helps.

Ph.
British Tools and Fasteners gives:
0.5 (1/2) inch 26 Tpi 0.0385 0.4590 ins 0.4606 inch
But in their data section it also says :
Most people think that all cycle threads are 26 tpi pitch. Whilst this is true of all the most popular sizes from 1/4" to 3/4" diameter, other pitches were also used as shown in the tables seen in the CEI section
So depending upon where you look you will find different answers. 24 TPI is also used.

The ICSCUTTINGTOOLS.com site gives 26 TPI for CEI and BSC. Only ADMF (Admiralty) is 20 TPI.

There is only one thread form, 60 degree with radiused crests and valleys. The only information I found on the radius is from Whitworth forms which are 55 degree.
With the changes from BSC to SAE around '68 I did not know if the cam thread changed. Just giving 1/2" BSC does not give the thread pitch.
Phil, could it be your pattern 24-7000 was UNF, not BSC? UNF has truncated peaks, not rounded which may have interfered with the BSC cam thread.
Hi All
As a "general rule" (pre SAE) BSA fasteners larger than 3/8in. are 20 TPI

John
Interesting the admiralty rating, I was led to believe that UK navy vessels had fasteners of at least 5/8 " diam, because it was unlikely that an untrained rating could strip anything that size or larger.This would be the war/ immed post war period.
Originally Posted by DMadigan
...With the changes from BSC to SAE around '68 I did not know if the cam thread changed. Just giving 1/2" BSC does not give the thread pitch.
Phil, could it be your pattern 24-7000 was UNF, not BSC? UNF has truncated peaks, not rounded which may have interfered with the BSC cam thread.
Hi David,
the parts-# for the nut for A65s has been the same from 1964 'til the bitter end, so I suppose they never changed the thread for the cam shaft nut.
I am even inclined to think the differing parts-# for 1962 (sorry no 1963 sparts list available here) is more like linked to the nut form or surface treatment than to a differing thread.

The spare parts list states the thread to be 1/2 BSCyc, whilst the conversion tables attached to the workshop manual list the 1/2" BSCyc thread to be either 26 or 20 tpi.

Prior to re-cutting I had tried the nut on two used camshafts and one brandnew SRM cam but couldn't get the nut to catch.
After having re-cut the nut's thread with a 1/2" UNF tap the nut could be screwed on all of the camshafts I have easily.

As stated previously, 1/2" UNF has the same thread angle and pitch as the BSCyc thread in question, so I opted for the bodge to ignore the rounded peaks in order to get the cam pinion on.
Surely, this is not how the makers intended but fair enough for me. 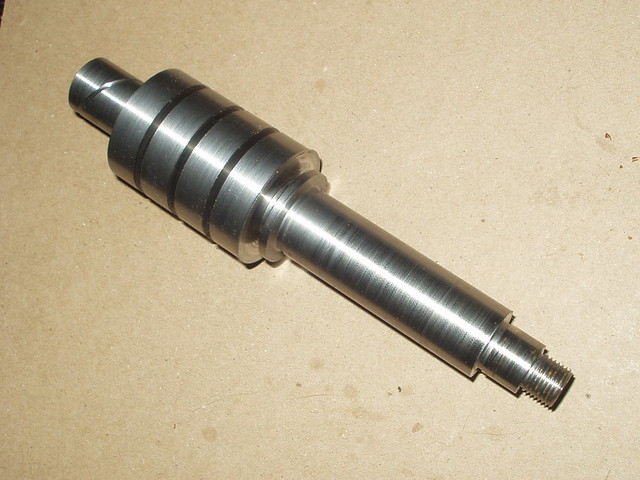 For the XS crank A65 with 90 degree offset. I tried the popular cam supplier but besides the com cost they wanted $200+ for "engineering time". I am not sure how much engineering it takes to rotate the cam 135 degrees rather than 180 degrees. I believe the lobes are ground singly referencing the keyway so the engineering cannot be that difficult.
I found a local cam grinder who will work with me and actually knows what an A65 is. I made the blanks and he will rough grind them then I will have them heat treated and he will finish grind. He quoted $150 for the grinding.
Since I will not be using the cam breather (it will breath through the primary) I did not drill the through hole. I also reversed the scroll in the drive side bearing to push oil into the end rather than pull it away.
Originally Posted by DavidP
I gave up trying to understand the haphazard way in which BSA delivered the change over to unified fasteners. The 5/16" rocker cover studs are unified, but the 1/4" are CEI, on the same head casting!?!

I own a 69/70 t120. about 60/40% unified / imperial.
If you think beezer make a hash of going unf/unc, have a look at triumphs....... they were completely crap at the job.
The factories just used up stuff they had and moved to unified as they went. Not rocket science. Norton still used bsf stuff
years later. If they had received orders at the beginning of the year for total production runs, it would have been worth
changing in one go, but they didn't. Like using imperial sized bearings, why didn't they go metric?
As always David, it's fun to see what you think is possible, and then you do it! I sure hope I'm still watching the BB site when you get it running. It will be 1 of a kind with that center crank bearing, and 180deg firing!
Originally Posted by Allan G
Originally Posted by DavidP
I gave up trying to understand the haphazard way in which BSA delivered the change over to unified fasteners. The 5/16" rocker cover studs are unified, but the 1/4" are CEI, on the same head casting!?!
The carb studs remained 5/16” BSF/CEI also
Tell me about it! I had to order new CEI allen bolts to mount the Mikuni adapters because they came with Triumph bolts, which were UNF.
New head casting for '71 but they couldn't complete the change to unified.

Too many old bits around? Easy solution, ship them out as spares and charge twice as much for them.
Around the early '70s when BSA/Triumph were changing piecemeal from BSW/BSF/BSC to UNF/UNC, the rest of the motor industry was changing over to metric threads
The moral of all this discussion is to not throw away that can of British fasteners we all have on the shelf somewhere . My last BSA , a B50, requires both SAE and Whitworth tools to work on. I think where they had leftover inventory of parts from the 250 and 441 models they used them up.

I often would replace thru bolted stuff with SAE just to save the Whitworth for a bike that had to have those threads.

Mr Mike
As a general rule , so it is only right 50% of the time. special fasteners that BSA made themselves stayed CEI or WW .
Plain nuts & bolts that got bought in changed to Unified .
One would assume that is because they had to tooling to cut CEI & WW and it was not yet worn out .
Originally Posted by KC in S.B.
Dave,......... need some cams??
Gotta move these............. Thanks KC, I only have two A65s at the moment. Well, one A65 and one A65XSCR.
Originally Posted by KC in S.B.
Originally Posted by KC in S.B.
Dave,......... need some cams??
Gotta move these.............
KC, I'd put my hand up for those cams, but I've read your sad saga about shipping to NZ
Shane, if you want the cams I can buy them from KC and ship them no extra cost. I have had good luck sending parts to NZ by USPS.
A padded flat rate envelope is $38.60. A cam is 15.3 oz and the envelope is good for 4 lbs so it may be possible to send four but definitely three.
Thanks, David. Let's see what we can organise between us.
Marked’em gone. And, fun with Dave’s calculation on my un-certified weight scale:
4ea = 4Lbs
All6 = 6Lbs. So, a pound-a-piece is a good planning estimate!
David, you appear to be over your PM limit