Britbike forum
Ok, this is my first post, but not my first rodeo. I'm seventy something and putting an engine together out of a box of bits. ( I thought it was all from one engine, it wasn't) ) Been doing this for 60 years. But I've run into something I've not seen before. I have a '67 crankcase and an earlyish (single plug) crankshaft, just had it reground. Nice new original pistons.(7-1 probably) Lovely late rods. so all together it's gonna be a nice engine. I'm balancing the crank as I write. The factory recommends 70% balance factor. OK.
So I weigh the reciprocating part of a rod ( 90g) + piston complete. (387g) x 2 = 954g. Then , 70% of that ( the factory recommended balance factor) = 668g. I make balance weights tape them on the crank and WOW I need to remove 300+ grams from the bottom of the crank to make it balance.
That's a LOT. a 3/8" bar of cast iron a foot long is that much!......Can anybody see where I might have made a mistake?.......Could it be that I just have very light pistons? Or did the crank that I have just have some very heavy pistons on it? I cant really drill that many holes. I'll have to mill the sides of the flywheel....Any comment are very welcome

I posted this in the wrong forum, It looks much more at home here.....

My lightened pistons are around the weight that yours are, although most aftermarket pistons weight about 420+, the low comp GPM +060 pistons I had weighed 428g each from memory, my Ed V pistons (lightened) weigh similar to yours. I've never balanced a crank myself so can't help on that bit although I've found 62% gives a nice smooth motor on a dry frame bike. How are you going to account for rocking couple?
Hi , did you weight the rods big end as well ?? that will be added to the rotating weight .......
Marinatlas has nailed it.

The rotating wt is what is inherently in the crankshaft plus the contribution made by the rod bigends. So weigh the bigends as you did the small ends.

As a check on your accuracy, the weights of the big and small ends should sum to the weight of the whole rod.
Originally Posted by geoff99
The factory recommends 70% balance factor.
The formula you need is:

"The formula you need is:


I think this needs double checking.
MM (John jumping in the deep end)
I think you are thinking about calculating the weight you hang onto the rod of an assembled crankshaft assy. A method commonly used with Harley's and Big Singles.

To do a twin, where the rods are not on the flywheel, you need to consider the weight of the big end of the connecting rods in your calculation.

So you use 100% of the rotating weight of the connecting rod (Bottom end of the rod and rod bearings), and in this case 70% of the reciprocating (top end of rod, rings, pistons and circlips).
Originally Posted by John Healy
To do a twin, ...
Ah, right, he has that extraneous cylinder. The equation is fine if only he would install his rods first which, I realize, no one does when balancing a twin, if for no other reason than the friction of the plain bearings in the big ends. Of course, when balancing a twin the flywheels are much further apart than on a single so the potential of a big rocking couple is there which is why dynamic balancing should be used (I know you know this, John, but it's worth mentioning in case the OP doesn't). 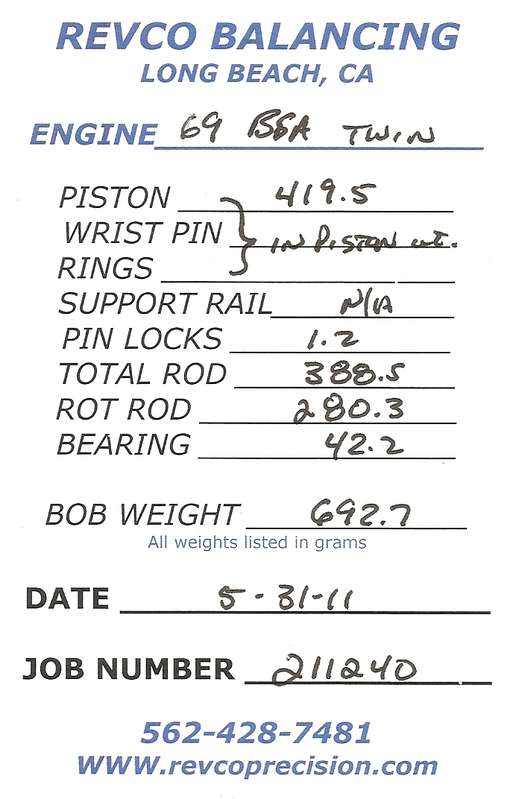 Just a quick add-on for what it's worth, A65's and A50's had different flywheels. You can work with either, though I reckon you could be drilling more in an A50 item.
From page B43 1970 factory manual.

its amazing what can be found in a workshop manual.

I suggest you try the factory weights ie 648.5 grams x 2, saving approx 40 grammes total, not quite the 300 gramme error though.

According to the manual there is no need to alter this if fitting oversize pistons.
Y'all lost me on big end weight vs small end weight. How does one differentiate? I can see weighing the rod and bearings to get a total rod weight, not now you can split the rod into two weights.

I'm looking for a local resource to balance my stuff. I'm rebuilding an A65 with the A70 rods with steel caps as found on TheBonneville Shop site, EMGO +.20 pistons, and Hastings +.20 Rings. I had thought to have it dynamically balanced for the new parts, but the mechanic I'm working with didn't think it that big of a deal. I'm still thinking it's a good idea. Off to find a tool so I can get after the sludge trap.

Big end and small end weights are from measuring the rod and piston laid horizontal with the unmeasured end suspended at its centre, the other on a scale at its centre.
Originally Posted by Magnetoman
Originally Posted by John Healy
To do a twin, ...
Ah, right, he has that extraneous cylinder. The equation is fine if only he would install his rods first which, I realize, no one does when balancing a twin, if for no other reason than the friction of the plain bearings in the big ends. Of course, when balancing a twin the flywheels are much further apart than on a single so the potential of a big rocking couple is there which is why dynamic balancing should be used (I know you know this, John, but it's worth mentioning in case the OP doesn't).

Of course it has nothing to do with having 2 cylinders or just 1, but whether the rods are easily removable, ie. have end caps for plain bearings. The same procedure would be used for a Starfire single (plus you wouldn't be risking wearing the bigend by hanging a bobweight off its rod - joking!).

One thing the OP mentioned was "I make balance weights tape them on the crank".

If they are taped to the crank, isn't it important that the weight is evenly distributed around the bigend journal? Or better still, hung from "frictionless" loops around the journals? So that the force acts from the correct distance from the crank axis?

I thoroughly endorse MM's recommendation for dynamic balancing in the case of a twin. Mine cost Â£70 20 years ago at Basset Down, it takes care of balance factor and the surpisingly significant rocking couple at the same time. If it's twice the price now I'd say it's money well invested.
I've done one rebore since, and all I did was minor scraping inside one piston to get them to match, not concerned that they were a few grammes heavier than the old ones, still a lovely smooth motor.

Tracey, a good calibrated (use standard weights or coins) set of scales, a horizontal surface, 2 small round topped things that will allow free movement of the conrod placed upon them (I find the handles of 1/2 round needle files good for this, as the 1/2 round keeps them from rolling about), and a block about the same height as the scale pan. Set the 2 round things apart by the distance of the big and small end centres. Zero the scales, place the rod so the bearing centres are on the round things, note weight. Turn rod around, note weight. Put rod on scales, note weight. If you've done it right, the 2 smaller weights will sum to the total.
Well there's something I learned. I never calculated in the rotating remainder of the rods and that's quite a bit. That's the discrepance I was looking for. The balance weights are bearing on the big-end journal and so act thru that

journal, the diameter of the weight has no significance. So long as it's round. But I can see a case for hanging the weights on a thread. I also see lots about "rocking couple." With the greater volume of the flywheel in the centre of the crank, only part of the

cheeks can contribute to a "rocking couple." I'll have to wear that. . I'll go and hide my head for a while in shame. The trouble is that there are balancers around, but they say "sure I can balance it, how do you want it done?" I'm better off doing it myself. The

crankshaft grinder , a brilliant bunch of blokes,( Crankshaft Rebuilders) balance cranks, but for big engines, they didn't want to know about an old pommy twin that's gonna vibrate your fillings out no matter what they do....Thanks everybody.....

For weights to be used to balance the crankshaft, Geoff says "the diameter of the weight has no significance. So long as it's round." Is not the important thing that the balance weight be symmetrical about the crankpin?

I used two 3/4" square bars of steel on a TR25 crankshaft bolted together with 1/4" bolts and added a nut on the end of each of the bolts to make the entire assembly symmetrical about its center. I drilled a hole at the centerline to ensure it stayed on the center of the crankpin and used a piece of aluminum beer can to protect the journal. Can't see that it needs to be round as long as the center of gravity of the weight is centered on the crankpin.
© Britbike forum